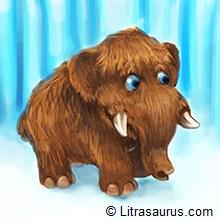 Wally was a Mammoth who lived in the ice ridden freezing cold area of Siberia. He was an only child of Mr.& Mrs. Woolly Mammoth.

Mammoths in those times were much hunted and in danger of extinction from the hunters who slayed them for their meat and their tusks. One day as they were grazing where the ice had receded and allowed some grass to grow they heard from afar a soft and sad and melancholy sound. They turned to look upon the glacier from whence it seemed to come. The glaciers were so beautiful and always exuded the most magical turquoise blue light as if therein lay a whole wonderful world, which later we may find that they did. Some thought that this inner glacial land was the real home of the Unicorn and that they lived within those beautiful caverns.

Mr.& Mrs. Mammoth drew close to the sound emanating from the glacier and they could faintly distinguish a shape therein. As they came closer they could just distinguish the outline of a maiden who seemed to be trapped in the glacier. All she could do was sing her story of how she had been trapped in the glacier by a wicked Yeti. Mr & Mrs Mammoth spent days slowly chipping away into the ice with their mighty tusks to try to free the poor trapped ice-maiden. Eventually they succeeded and so grateful was the ice maiden that she granted them a wish but just for one person as that was the limit of her powers.

The Mammoths thought long and hard. They had lost many of their friends and family to the voracious hunters, and they realised that they would perhaps face extinction if things did not change. They were worried for themselves but much more for their son Wally whose gentle and trusting nature would make him an easy prey for the hunters. They decided that as they were more able, being older and wiser, to look after themselves, that they would ask the ice maiden for a special gift for their son Wally. They explained to her that they feared for his safety and asked if she could give him the gift of invisibility so that he would not stand out from the crowd (difficult for such a large creature). She answered that it would be her pleasure and so it was that Wally was given a cloak of invisibility that would envelop him and also with his permission those of his friends who needed his help, but on the understanding that this would only be activated when used in acts of goodness, kindness or dire need.

Indeed, it was with the help of the magic cloak that he travelled safely to Perpetua where he now lived and became a friend of Litrasaurus. One of his favourite places to visit and play were the The Snow-Capped Mountains.