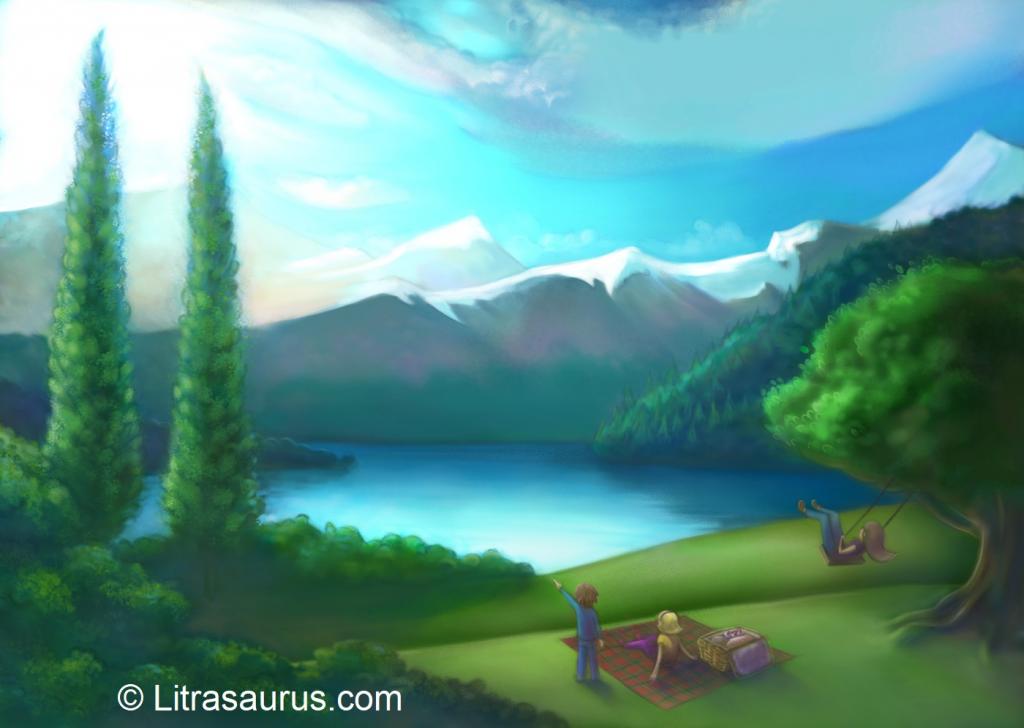 Here, to the northern part of the land of Perpetua, lay a beautiful region of high mountains with beautiful lakes and waterfalls of sparkling clear water. Some of the highest mountains were capped with snow even in the midst of summer, and in winter time the snow fall would cover the mountains right down to the to the shores of the lakes - which in winter seemed so still and reflected the skies and mountains like a mirror. It was in spring when the snow started to melt that it ran down the ridges of the mountains and created dozens of waterfalls that fed into the lakes.

In Summer the shallower edges of the lakes were warm enough to swim in and in Spring there were some of the waterfalls that had hollows behind them so that, if very careful, one could hide behind them and watch the wonderful cascades of water unseen or even stand in some of the smaller and gentler waterfalls and enjoy the cascade of (albeit very cold) water shower upon you. When the snow had melted in the lower areas there was rich pasture land and cattle and sheep would gently graze in these areas. Spring flowers would spring up through the lush green grass making a lovely sight. In the higher parts of the mountains were mountain goats called Chamois, so agile, springing from one rocky outcrop to another. They were very shy and seldom joined the other creatures on the lower levels. It was home to all sorts of birds in spring, summer and autumn but in winter only the hawks and eagles could be seen flying high over the landscape.

Litrasaurus' friends would come with the children and visit. When it was winter they would have fun in the snow, snowballing, sledding, building snowmen and igloos to play in.

Wally Mammoth particularly loved it as it reminded him of his old home in Siberia when the area was covered in snow. In the spring they would go to see the early flowers and watch the water cascading down the slopes as the snow began to melt. In summer they would come to swim and enjoy the cooler air.

Ariadne had made two strong golden webs which ran high into the mountains, along which ran a cable car, this, Professor Sci-Fi had invented, the carriage was solar powered (powered by sunlight in the day time which was stored in batteries) and it would, at the touch of a switch, drive the motor which gently transported the cable car and its occupants high into the mountains. A wonderful view across the land could be seen at the top.

In autumn the colours of the leaves changing was a glorious mass of orange, gold, yellow and green.

On the mountain sides were all sorts of trees deciduous ones which changed colours but shed their leaves totally by winter and evergreen trees which were mainly pine trees and stayed green all the year round. The children would love to pick some of the fallen pine cones and take them home to make lovely Christmas decorations. Dedicatus would sometimes allow the children to use his special inks and paints and gold and silver twinkle dust to make them extra special.

By the way some people believed that the beautiful lakes were home to Water Nymphs - have you read the story about "The Prince and the Water Nymphs" ?

Would you like to imagine visiting this part of Perpetua ?

If so what season would you choose and what would you like to do ?