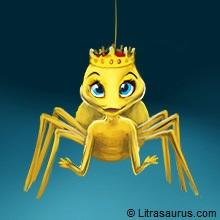 Ariadne, or to give her her full name Ariadne Arachnid Aureus, was a large golden spider who was a very dear friend of Litrasaurus.

She was able to spin webs of strong golden threads that could trip or catch the androids to prevent their advance (more of that to follow).

Ariadne was very young and beautiful. She came from a land in Asia Minor that was once ruled by King Midas whose touch turned everything to gold. She was descended from a royal family of Spiders. She wore upon her head a beautiful gold coronet.