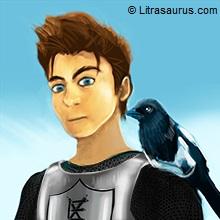 “Ex” for short – had come from a futuristic land where robots and computers controlled the everyday running of that land. His parents had been very clever scientists and they had taught him everything that they knew but they were very busy with their work and so his early life was very lonely and without any playmates he knew nothing of friendship and love loyalty and happiness. Sadly his parents were killed in a laboratory accident when he was nine years old and he had only the robots. He decided to learn as much as he could and as he had an amazing memory in a few years time he was like a walking encyclopaedia!

One thing he learnt very early on was that knowledge was a key to power and as such he decided to leave his land in search of one that he may rule. He knew that other lands were not as advanced as his own and so he decided to build a large sailing ship into which he built huge computers to cover the navigation of the ship and he also created a small submarine for exploration beneath the sea.

During these learning years he had acquired a very clever pet, a Magpie, who would sit on his shoulder and go with him wherever he went. The Magpie would go and fetch (or steal really) many of the shiny tools and microchips that Ex needed to create his computerised masterpieces. Magpies, I suppose you know, do take things indeed there are many stories of them flying into houses through open windows and stealing jewellery or just anything shiny. Also it is common to hear tales of Magpie nests being found to be full of silver paper, shiny stones and even coins!

So it was then, that in his mighty ship full of stores and everything that he could possibly need, that he and Magpie set sail. After several years of exploration, and indeed pirating on the high seas, he came to Perpetua. The land was temperate in climate and the people seemed innocent and harmless. This he decided would be the land that he would rule. From his sailing ship moored in the bay he started to build his robot army of androids which he would later program to do his bidding.

It did not take him long to see that the land had hundreds of Libraries full of books of knowledge and fantasy. He quickly realised that these books and the knowledge in them would be a hindrance to his plans as they provided knowledge and imagination. He thus decided that he must destroy all the books and programmed the androids to seek out and destroy them, this would mean that they would have to depend on him for their knowledge and he could tell them just the things that he wanted them to know. Thereby obtaining power over them all. He built himself a very tall Extinctus' Tower in which to live and from where he could see for miles and miles across the land of Perpetua.