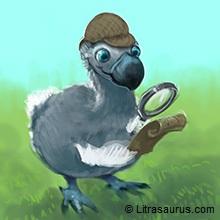 Now banished from the land of Perpetua where Litrasaurus lives and sent to live on an island, sadly, as he is a flightless bird, he has no means of returning.

He was banished by a powerful man in Perpetua whose mission was to rid the land of all books - his name was Extinctus .

The island in Mauritius where he now lives used to be home many, many, years ago to his relatives but sadly now he is the only dodo left (Did you know … Dodos used to exist but are now extinct). Centuries ago sailors visited the land and took the other dodos for food. They had been easy for the sailors to catch because they were a gentle, kind and trusting creature and of course could not fly away ...

Dodo does, however, have special powers of detection and he still manages to help Litrasaurus and his friends by sending messages and clues to the location of where books might be found, rescued and taken to the magical Cave . He is helped in this by distant relatives of his, the Doves and Pigeons who can fly huge distances and are happy to carry messages.