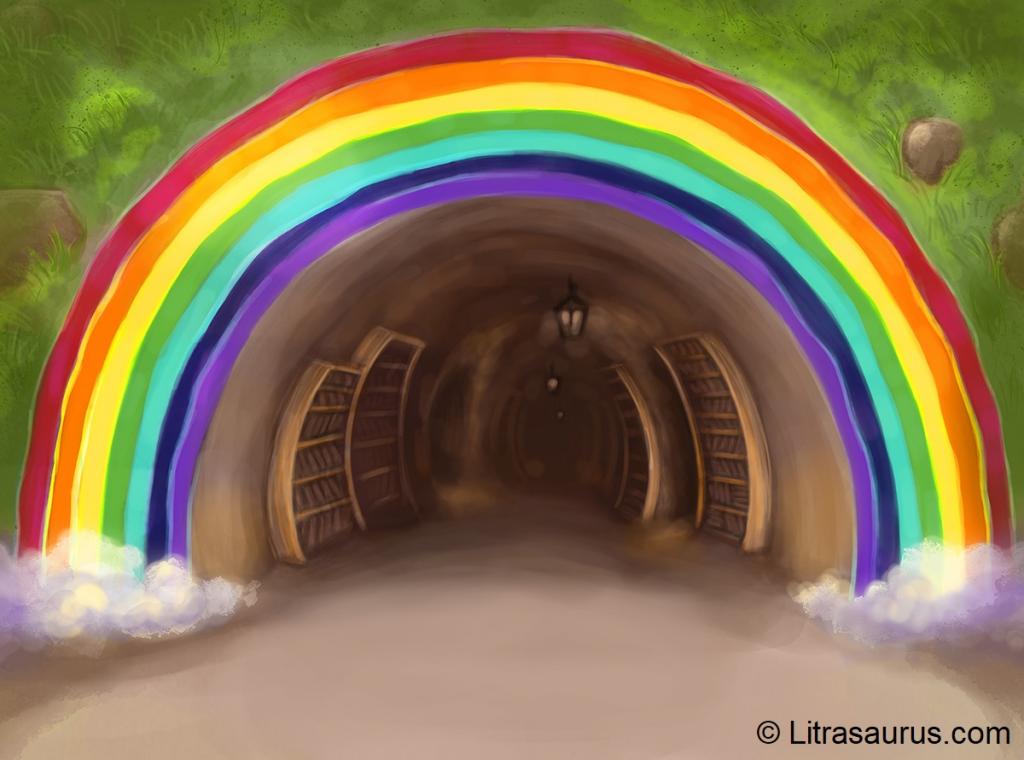 This cave was home to Litrasaurus and all his books.

Also hidden away in the cave was Professor Sci-Fi 's laboratory which was full of bottles of potions and medicines, test tubes, reference books on all sorts of subjects, and a store where he had cogs, wheels, wood and electronic components for his inventions - he just loved learning and making new things.

Dedicatus too had a workshop tucked away in the cave where all sorts of bookbinding equipment was kept, including: coloured rolls of leather, glues, strips of tissue-thin gold leaf for embossing the letters on the book covers, rows and rows of coloured inks pens, paint brushes, glues, papers and parchments.

The cave was a very special place and could have been the reason that Litrasaurus survived whatever it was that killed all the other dinosaurs. It may have been a meteorite that hit the planet and made the atmosphere unable to support their lives or simply climate change - either way he was safely in the cave when it happened and there was sufficient oxygen in the labyrinth of tunnels for him to survive until the earth had returned to being an habitable place.

The corridors were lined with wonderful bookcases with thousands of books. There was even a special reading room where visitors could sit on big comfy sofas or laze on huge floor cushions reading their books in peace and quiet and let the words of the stories weave a magical spell on their imagination.

Inside and along the passages were ceiling lanterns which were kindly lit by the Fireflies and Glow Worms , the lights were so pretty as some were yellow, green, or pale red.

Litrasaurus also shared the cave with Bats who loved the dimly lit corridors and they helped him in some of his adventures to rescue books especially because they could navigate in the dark.

It was a true Labyrinth or maze, of passages some led down to the seashore where in the caves that led out to sea Litrasaurus could meet his sea friends. Some of these passages to the sea were filled with amazing Stalactites hanging like icicles from the roof and below them were stalagmites which rose up from the ground in mounds from the dripping water from the stalactites. They all enjoyed sitting by the waters edge watching the sea gently lapping at their feet and looking out to sea, or going for a swim where the water was warm and shallow and they were free from prying eyes.