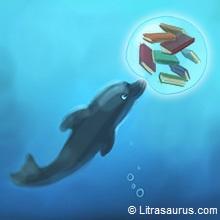 Didi was a dolphin and of all the sea friends and other Dolphins she was the most clever.

When ships were lost at sea she would be told by her marine friends and she would rush to the craft and find any books therein and blow a huge bubble of air around them so that the water would not damage the precious scripts. She would then be able to gently push the air bubble with her nose far away through the seas until she came to one of the sea caves at the end of one of Litrasuarus‘ secret passages and deposit safely the air bubble of books on a dry landing area for Litrasaurus to collect.

Her air bubble was perfect as it gave buoyancy to some of the very heavy books that might be found.

She has a very famous story about a preciously bound copy of the The Rubaiyat of Omar Khayyam which was being transported to America in the Titanic a ship which sank having been hit by an iceberg. Didi recalls the fact that this ship was supposedly ‘unsinkable’! The book was covered in beautiful jewels but was lost to the sea. She dreams of finding it for Litrasaurus.