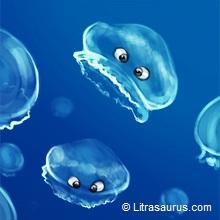 Well they were spineless creatures! But very spiteful and they were jealous of other more sophisticated sea creatures or as Didi Dolphin would say, with a smile, “jellyous”.

The Jellyfish had not enough brain to know right from wrong (although many creatures with larger brains suffer the same sad state). They revelled in causing trouble, whether hiding in the shallow waters where they lazed , hidden in the sand and would sting the children’s feet if they paddled nearby or they just interfered in any business that was not their own for no particular reason.