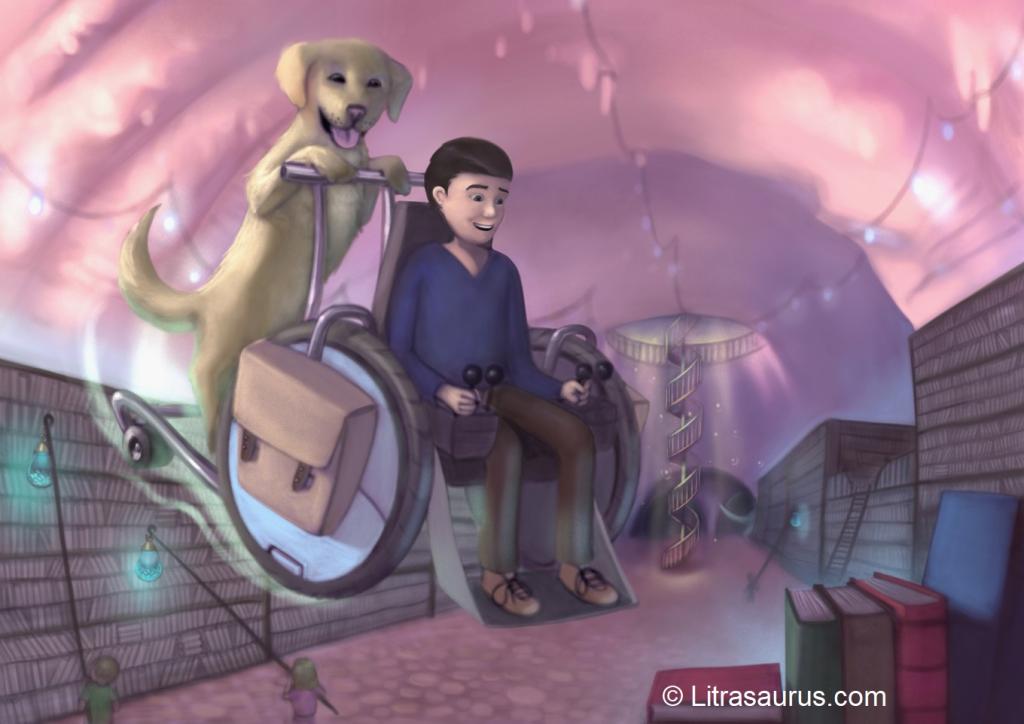 Christopher was a happy boy who was kind and friendly to everyone.  He loved to run errands for his ageing grandparents and to go to the cave of Litrasaurus to listen to the stories that were read to all the children who visited it. He loved, most of all, the Library in the cave, where there were comfy cushions to lie or sit upon and hundreds of wonderful books. He would read many adventures and longed to travel to some of the places that he read about and when he was older, he decided, he would love to become a Librarian and look after the books and share stories of wonderful places with others and perhaps write some of his own.

Sadly one day he had a serious accident which left him unable to walk. His parents had heard about a wonderful organisation who trained dogs to help disabled people.  The dogs were very clever and they determined to ask their help. The dogs were trained to help people, for instance by switching on lights or helping them to get dressed, or do the washing – all sorts of amazing things. So it was that they found a Labrador who was able to do all the these things.  Christopher was given this amazing dog to be his helper.  The dog was wonderful and pulled the wheelchair that Christopher was in when needed and helped him with many tasks. So now Christopher could return to his visits to the cave with his faithful friend he called ”Lucky”.

Litrasaurus knew of the accident and what hard work it was for the dog to pull the wheelchair, especially up hills and on rough ground, and so determined to find a way to help.  He asked Professor Sci-Fi what he could invent!  The professor came up with a brilliant idea; he would create a motorised wheelchair that would run on powerful batteries.  It would have a basket to carry things in, lights, and a rear trolley stand so he could take other children for rides, and most important it could adjust its height which would mean Christopher could lift himself right up to the top shelves of the library that even the other children could not reach!  The professor also devised retractible wheels and two ”fins” that would turn it into a boat and transport him in the water and he had many adventures with Litrasaurus’ sea friends.  Christopher and his family were overjoyed and Christopher loved getting the books from the tall library shelves for the others so he did realise his dream and became Litrasaurus’ Librarian.