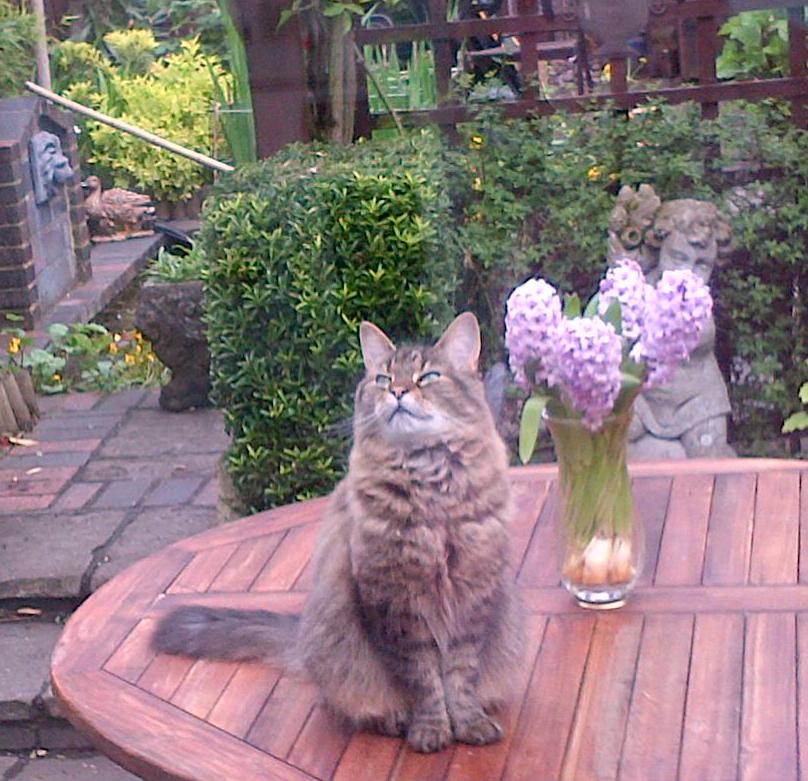 It was Twiggles birthday and she purred with anticipation when she heard the familiar squeak of the front gate as the postman arrived to deliver the mail. There was a charming card from her neighbour Darcy which he had made for her. It had lovely differently coloured paw prints which he had made into the shape of flowers. He must have dipped his paw into an assortment of coloured inks to do it and she knew how much he hated wet paws, so it was very sweet of him. His twin sister Lizzie had also sent a card upon which was a picture of a fabulous bird of many colours soaring through a clear blue sky, Lizzie knew how much Twiggles wished that she could fly and that she would watch enviously as the birds that visited the garden took flight. In the card was an intriguing message “ If you leave a wish on the garden table this evening a dove will collect it and take it to a special place and you may get a lovely surprise before too long!”

Twiggles half thought that it was a tease but nevertheless she put her wish on the garden table before going to sleep. The next morning when she went for her usual trip to the garden fishpond (she just loved the taste of the pond water even though it looked a strange greeny colour and it was so much better than the water from the tap) she noticed that the envelope containing her wish had gone, “Oh, I suppose it has blown away in the wind” (but it had not!) The wish had in fact been collected by a dove and taken to the wonderful land of Perpetua. Here it had been received by a magical bird called Fancy. Now Fancy knew very well that most cats were not the friends of birds, but also knew that Twiggles was an exception and she truly admired their ability to fly through the skies. She had asked her detective friend Dodo to check that this was true and he had confirmed that this was so. Fancy decided to grant this special wish that Twiggles had made to experience flight she decided that she would do something about it for a birthday gift, she had a special seat that she could place upon her back in which she could safely transport any passengers and as she could change her colours and size to suit the needs of her journeys she began planning.

Twiggles, many years ago had lived in the countryside,where all sorts of special birds would come to the garden- Kingfishers which would fish in the stream and they flew so fast they were almost a blurr, woodpeckers would come tap-tapping on the trees and sometimes a family of ducks would come down stream to visit. In the summertime and autumn she would watch in amazement as brightly striped hot air balloons would come silently gliding over the fields until a roar from the gas flames that heated the air, would drive them higher into the sky. Happy memories indeed!

Now she was older and lived quite near to a busy airport, she marvelled at the huge aircraft and noisy helicopters that traversed the airways. “If those big heavy things can stay up in the air- why can’t I ? “ she pondered.
Fancy, in the meantime, had decided to send an invitation to Twiggles. It was to be beautifully written in golden letters by her friend Dedicatus who had a special workshop in the cave of Litrasaurus where he wrote and repaired books and inscribed dedications in them. He was a scribe and could make the letters look wonderful. The invitation said : “ Dear Twiggles, On a day of your choice and to wherever you may wish to go, I will take you on a flight. Leave a message for me on the garden table and it will be collected in one week. From Fancy”

The invitation duly arrived and was placed on the garden table for Twiggles to find. “Can this possibly be true” she thought and was half afraid to believe that her wildest wish could come true.

It still might be a hoax but she thought long and hard. What if it were true? Where might she ask to go? “I think that I might go to anywhere that Fancy might take me – just to feel the wind in my fur and see the earth from high above” She then thought that, if it were possible, she might like to re-visit the countryside where she used to live and see from afar the rabbits bobbing about in the fields- she had so wanted to have them as friends but they, like the birds, had been afraid of her. Perhaps they could glide alongside the colourful hot air balloon to get a closer look and maybe on the way back fly alongside the enormous aircraft. Perhaps she might ask Fancy how they could stay up in the air when she could not. Twiggles had so much to think about before she replied. If this could be real it would be the best birthday present she could ever have dreamt of.