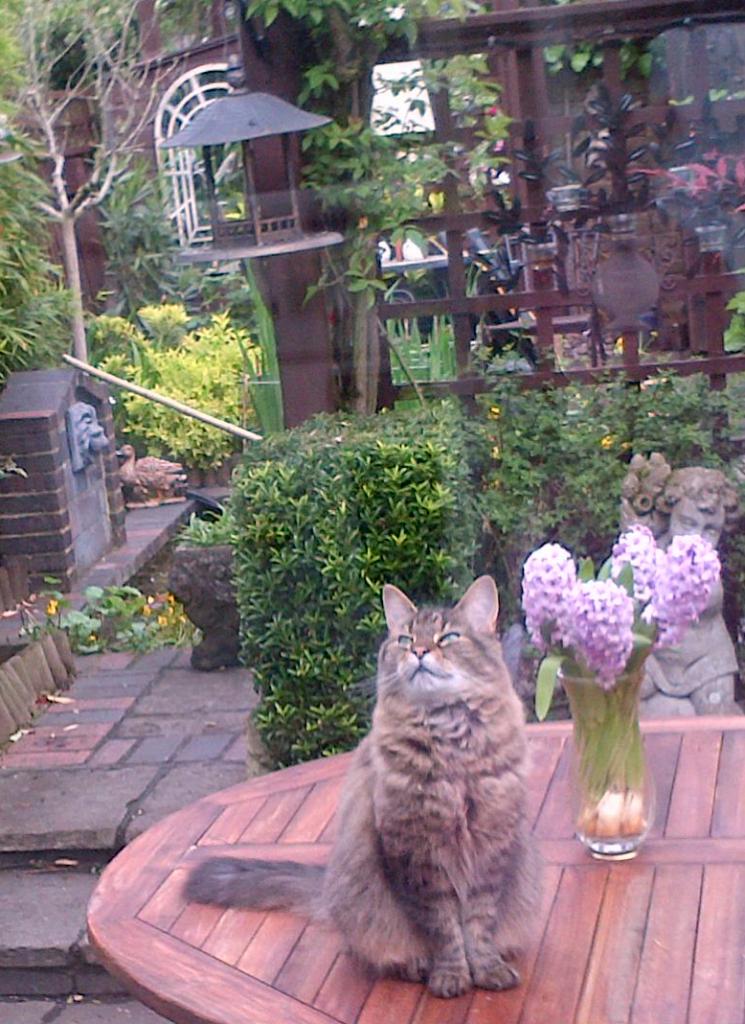 It was just the faintest of shadows crossing the sun.You could miss it if you didn’t know, but she knew!

However hard Twiggles tried she would never understand.She loved everything about flying, but at times like this that was no compensation. With a sigh of resignation, she executed a perfect barrel roll and headed for cover.

Out of the corner of her eye she spotted Ginger D’Arcy dropping like a stone!  With a shuddering crash he impacted the top of the garden fence.Then, miraculously, he was just standing there, rocking slightly as the fence struggled to cope with the forces unleashed upon it.

Flying wasn’t really Ginger’s thing; gravity and his love of fine dining saw to that.On the other hand, Twiggles, when she launched herself through the air, felt as though she was flying, and didn’t she love it.Sadly, the best poor Ginger could achieve was mastering the art of making a fall look dignified.With a clatter of wood panelling he descended to the garden next door, the fence merely a staging post for him on his way down from the roof to his bowl.

Ever since Twiggles was a young kitten she had marvelled at flying.When she sprang, for those few, precious, airborne moments, she could just imagine what it felt like to be a bird.So, quite naturally, she loved birds and everything about them.Sadly, they did not seem to love her in return.In fact birds gave her no end of trouble, not least that blackbird.

You see birds aren’t like rabbits.When Twiggles was younger she lived in a beautiful cottage in the countryside which had a stream and a wood.In the wood, and the fields all around, were rabbits, and she used to be able to make friends with some of them.The bigger, grown up, rabbits all used to run away when she appeared, but often a little baby rabbit would sit transfixed as Twiggles appeared in sight.Not wanting them to feel lost and alone she would grab them by the scruff of the neck and carry them back, through the cat flap, into the cottage.There, in the conservatory, she would gently place them down next to the radiator where it was warm and watch dotingly, as if they were her own kittens, but, of course, they were not.

Twiggles knew she was in trouble the moment she heard Carlotta shriek.Twiggles lived with Carlotta, first at the cottage and now in the wisteria covered house on the Green.Actually she knew earlier, when the little brown bundle she had brought into the house had not moved.The baby rabbits, you see, would hop about.Eventually, though, Carlotta would spot them, then, carefully pick them up in a net, so as not to put her scent on them which might frighten the other rabbits, and carry them back home across the stream to the warrens in the field beyond.Whilst there weren’t any rabbits in the garden of the house on the Green, there were little brown birds that hopped around on the ground just like those little baby rabbits.So, Twiggles had picked one up and brought it back into the house.

All too vividly Twiggles remembered how upset Carlotta had been.What Carlotta did not seem to realise was that Twiggles was upset too.She hadn’t meant to the harm the little wren; she just wanted to make friends.The trouble is when you are a lot bigger, even if you are playing gently, it may be too rough, so you have to be very, very gentle with animals, or even other people, that are smaller than you are.A lesson had been learnt that day and Twiggles never chased after birds again.

Mind you, she did still love to sit on the shed roof, which was so warm in the sunshine, and watch all the different birds flying around.Maybe, just maybe, one day she could find a way to fly.