Didi and the Androids 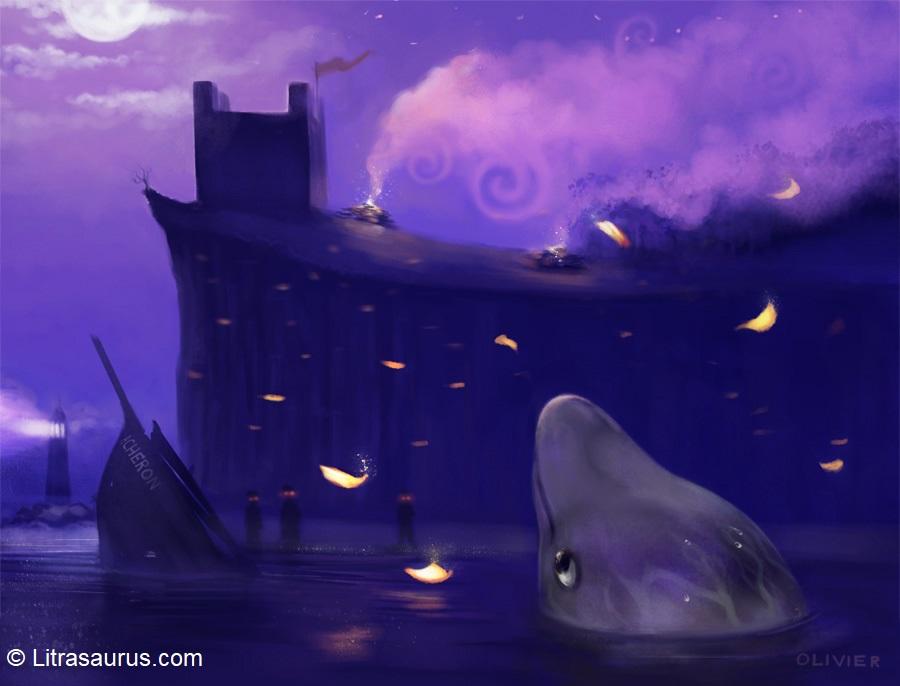 Nobody knew how the Androids worked, not even Professor Sci-Fi.

Ever since the foreign leader Extinctus had arrived from a strange and far-away land, the Androids had stalked Perpetua in search of books to burn. The Androids never spoke. They never harmed anybody. But they seized books from every home they encountered and then marched them far away to the tower where Extinctus lived. There the books were burned in great fires visible for miles each night.

The fires were even visible from the sea where Didi Dolphin lived, glittering like stars that had fallen from the heavens to settle on the distant coast.

But now Didi had a mission, one that could change everything. Professor Sci-Fi had shared the mission with Didi as she waited in a pool inside the secret cave of Litrasaurus, the walls filled with shelves of countless books that stretched away into the darkness.

“There was once a vessel,” said the professor, “that sailed the seas with but a single person on board. She was named Acheron. Every task aboard the ship was conducted by androids and the lone sailor was there to ensure that the robots performed their duties perfectly.”

The professor turned from his bubbling flasks and simmering petri-dishes and looked across at Didi. He tossed her a fish as he spoke. “But the vessel sank one night in a terrible storm. I believe that if the ship was controlled by androids then there must have been books about androids on board, no? How else would that lone sailor have fixed any malfunctioning robots?”

Didi nodded, the water rippling around her like liquid gold in the candlelight.

“Can you find that vessel for me, Didi?” the professor asked.

Didi needed no further prompting. She swam out of the warren of underwater tunnels that linked the caves with the sea beyond, and ventured out into the wild ocean. She cruised the warm waters of the tropics, circled the great frozen wastes of the polar ice caps, skimmed the tumultuous surface and probed the deep, cold depths of the ocean until, one day, she came across a shipwreck beached upon Perpetua’s sandy shores. The rusted hulk of the wreck still bore the name Acheron upon her stern.

Didi raced toward her, but almost immediately she saw the Androids swarming across the ancient vessel’s remains, carrying books from her holds and stacking them on the beach nearby. Extinctus must also have heard of the Acheron, and sent his robotic minions to empty the ship’s hold of books.

Didi swam into safer, deeper water, her heart pounding. The Androids had never attacked anyone or anything before. Perhaps they had been reprogrammed by Extinctus? Perhaps he had realised that books were being protected by Litrasaurus and his friends? If so, Didi knew she must find and rescue the books that Professor Sci-Fi needed, more so now than ever.

The Androids were still on the beach stacking the books, but Didi was far cleverer than mere machines. She waited patiently, staying just out of sight under the water, until the tide began to change. Ever so slowly the tide edged up the shoreline, closer and closer to the pile of books. Didi waited and waited in silence until the water was almost upon the books, and then she charged in.

The Androids heard Didi’s approach and rushed to stop her, but she was far too fast for them. She swiped the pile of books with her tail and they crashed into the sea around her. She swiped them again, sweeping them out of the Androids’ reach as she turned to blow a protective bubble of air around the books.

A metal hand grabbed her tail, hanging on tightly. Didi pounded the water with her tail, shaking the Android up and down. Water splashed and sparkled in the sunlight and drenched the Android, and suddenly sparks flew from the Android’s head and chest. The Android shuddered and stopped moving as the light faded from its robotic eyes.

Didi pulled her tail free and raced away before the other Androids could reach her. She swam powerfully away, blowing bubbles around the books floating in the sea before they were damaged, and then she joined the bubbles together. Didi Dolphin turned for home, nudging the bubble along in front of her.

Didi swam home to the caves, where Professor Sci-Fi was waiting for her. She surfaced and the Professor gasped as he saw so many books on robots land at his feet on the rocky shore.

“My, Didi, you have done well!” he said in delight as he fed Didi with fresh fish. “Perhaps now I can find a way to stop those Androids from burning our books!”

Dean Crawford is a Guest Author